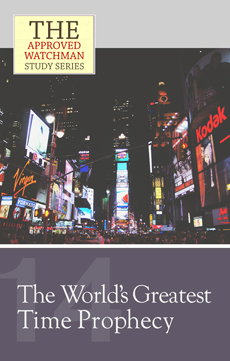 You are about to study the longest and most significant time prophecy in the Bible. Given more than 500 years before the death of Christ, it accurately pinpoints the time of His sacrifice. And as the only place in the Old Testament that speaks of a coming "Messiah" by that term, it ranks at the top of all Messianic prophecies. Yet this prophecy, found in the eighth and ninth chapters of the book of Daniel, moves beyond the earthly ministry of Christ to provide a panorama of His present work for us in the courts of heaven.

We will cover the prophecy in three lessons. In the first we will concentrate on establishing the time elements involved. The next two lessons will take us into the throne room of God, opening to our understanding the special work of Jesus for us in these last days.

You will remember from Lesson 3 that the prophecy of Daniel 8 begins with a ram and a goat. After discussing the goat's horns, the vision then turns to the activities of the little horn, which magnifies itself to defy heaven, casting truth to the ground and trampling upon the sanctuary and the host.

2. Who was commissioned to make Daniel understand the vision? Daniel 8:16

The angel began to explain the vision. He told Daniel that the ram represented Medo-Persia; the goat and its horns represented Greece.  He enlarged a little on the activities of the little horn, but said nothing more about the time factor involved.

3. When Gabriel stopped short of a full explanation, what happened to Daniel? Daniel 8:27

"Afterward I rose up, and did the king's business; and I was astonished at the vision, but none understood it." Daniel 8:27.

4. When Gabriel finally returned to explain the time portion of the vision, how much of the 2300 days did he say was designated for the Jewish people? Daniel 9:21-24

5. In Bible prophecy, God has appointed a short unit of time to represent a longer time period. What scale does He use? Ezekiel 4:6

Applying this rule, 2,300 prophetic days is actually 2,300 literal years, the first 490 of which pertained to the Jews.

6. The time period would begin when what command went forth? Daniel 9:25

7. In fulfilling God's command, what three kings of Persia would need to make decrees regarding the rebuilding of Jerusalem? Ezra 6:14

The final decree, that of Artaxerxes, is recorded in Ezra 7, and went into effect in the autumn of 457 B.C.

8. Who would appear after seven weeks and sixty-two weeks? Daniel 9:25

Sixty-nine weeks equal 483 prophetic days. From the autumn of 457 B.C., 483 years takes us to the autumn of A.D. 27. According to the prophecy, that is when the Messiah would appear. "Messiah" is the Hebrew word for "Anointed one". The Bible tells us that "God anointed Jesus of Nazareth with the Holy Ghost and with power." Acts 10:38.

That anointing took place at His baptism (John 1:32). Jesus was baptized in the autumn of A.D. 27, the precise time foretold in Daniel's prophecy.

9. After Jesus was baptized, what did Andrew tell his brother Simon? John 1:41

10. As Jesus began His public ministry, what did He say that reveals His awareness of His prophetic dateline? Mark 1:15

11. Indicating that Jesus came right on schedule, when did Paul say the Saviour appeared? Galatians 4:4

12. What would Jesus cause to cease in the midst of the seventieth week? Daniel 9:27

In the spring of A.D. 31, exactly half way through that seven-year period, Jesus brought to an end the whole system of sacrifices and oblations by offering Himself as the Lamb of God, to whom the whole sacrificial system had pointed.

13. What happened in the temple in Jerusalem when Jesus died which signified that its ritual services would never again have any meaning? Matthew 27:51

The "seventy-week" portion of the 2,300 years ended in A.D. 34. In that year Israel's probationary time ceased, and they sealed their rejection of Christ by stoning Stephen. With the Jews no longer God's chosen people, the gospel began to be proclaimed to the Gentiles, and the Christian church inherited all the privileges promised to the descendants of Abraham (Galatians 3:29). The temple and the city of Jerusalem were destroyed by Roman armies in A.D. 70 (Daniel 9:26, 27; Mark 13:14).

17. What instructions did the angel give which show that the vision was not given for Daniel's day? Daniel 8:26

18. When would knowledge of the prophecies of Daniel finally be increased? Daniel 12:4