3 - A One World Government? 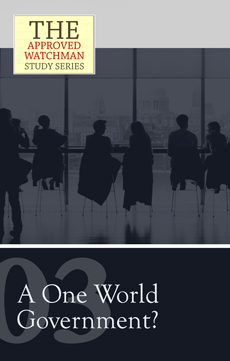 Bible School Home
The Approved Watchman Course Home
Download this lesson [PDF]   Lesson 2 - How Can we Tell the Future?
Lesson 4 - Could We Be Earth's Final Generation?

Read Daniel 2:1-30. Then find answers to these questions.

3. Why was King Nebuchadnezzar troubled? (Daniel 2:3)

Read verses 31-35. Then find answers to these questions.

His head:
His breast and arms:
His belly and thighs:
Daniel 2:33
His legs:
His feet:

10. What nation did Nebuchadnezzar represent? (Daniel 1:1)

11. According to the interpretation, what would arise after Nebuchadnezzar’s golden kingdom? (Daniel 2:39)

12. When Babylon did fall, what two nations, symbolized by the image’s silver breast and arms, shared world ruler ship? (Daniel 5:28)

15. What nation does this goat represent which would conquer Medo-Persia? (Daniel 8:21)

16. Like the others, how extensively would this third kingdom rule? (Daniel 2:39)

The great horn between the goat’s eyes represented Alexander the Great, who died at a young age without arranging for a successor to rule the conquered kingdom. True to prophecy, the territory was divided into four smaller kingdoms, and remained divided until superseded by the next world empire.

After Greece, the fourth and final nation to rule the world was the Roman empire.

21. From its point of origin, what directions did this kingdom spread? (Daniel 8:9)

Rome, coming from the west, gained control of Egypt, Syria, and Palestine.

22. According to Nebuchadnezzar’s dream, this fourth kingdom would be as strong as what metal? (Daniel 2:40)

The Roman Empire, the last to rule the world, was absorbed by Germanic tribes, which divided up the territory and eventually became the modern nations of Europe.

24. How does the prophecy describe the attempts of later kings to unite themselves? (Daniel 2:42,43)

25. What prophetic statement has prevented modern kings from uniting under one world government? (Daniel 2:43)

Time and again since the fall of Rome men have attempted to unite the world under a single government. But the word of God has declared that it cannot be done, and according to that decree all attempts have failed.

29. What did Daniel say about the certainty of the dream and its interpretation? (Daniel 2:45)

“The king answered unto Daniel, and said, Of a truth it is, that your God is a God of gods, and a Lord of kings, and a revealer of secrets.” Daniel 2:47.

The Imagery of Daniel 2