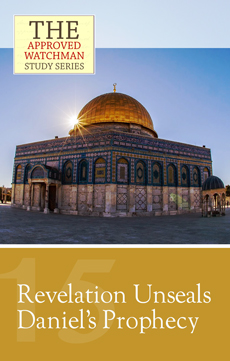 Behold, I will make thee know what shall be in the last end of the indignation: for at the time appointed the end shall be.” Daniel 8:192. How long was the book of Daniel to be closed up? Daniel 12:9

3. Revelation pictures a mighty angel with what in his hand? Revelation 10:1, 2

4. The mystery would soon be finished as God had declared to whom? Revelation 10:7

“And God called the dry land Earth; and the gathering together of the waters called he Seas.” Genesis 1:10.

6. In Bible prophecy, what do waters symbolize? Revelation 17:15

“Upon the sea and upon the earth.” Revelation 10:5. The book of Daniel was to be opened in an area occupied by many nations, and also in a sparsely populated land.

In 1800 Daniel was a closed book. In 1812 the study of prophecy began in England. It soon took hold throughout Europe, Asia, and Africa. Soon more than a hundred writers from a wide variety of denominations were interpreting Bible prophecy. Loosed by the hand of a prophetic clock, scores of men, representing over a dozen nations on four different continents,  independently and simultaneously began predicting the fulfillment of the 2300-day prophecy.

In the United States, the most noted expositor of Daniel 8:14 was a Baptist, William Miller. He and 43 ministers of 13 denominations unleashed perhaps the greatest prophetic awakening in American history. By a thorough study of the 2300-day prophecy, they discovered that the 2300 days would expire on October 22, 1844.

7. When the book of Daniel was still in their mouths, what would it be like? Revelation 10:8-10

“Thy words were found, and I did eat them; and thy word was unto me the joy and rejoicing of mine heart.” Jeremiah 15:16.
“How sweet are thy words unto my taste! yea, sweeter than honey to my mouth!” Psalm 119:103.

It was commonly believed that the earth was the sanctuary to be cleansed, and that Jesus would come at the end of the 2300-day period. No message could have been sweeter. Many gladly gave up their jobs and spent their life’s savings to spread the wonderful news. But when the date passed by and Jesus did not return, they experienced the bitterest disappointment of their lives.

9. Those who had experienced the bitter disappointment were told they must do what again? Revelation 10:11

12. What does the apostle call the temple of God in heaven? Hebrews 8:2

13. The earthly tabernacle, being true to its pattern, served as an example and shadow of what? Hebrews 8:5

14. How is the heavenly tabernacle rated, compared to the earthly? Hebrews 9:11

15. Who is the High Priest of the heavenly sanctuary? Hebrews 9:11

“Wherefore, holy brethren, partakers of the heavenly calling, consider the Apostle and High Priest of our profession, Christ Jesus.” Hebrews 3:1.

16. What two apartments of the earthly tabernacle did the veil divide? Exodus 26:33

17. What is another name for the most holy place? Hebrews 9:3

18. How often did the earthly high priest go into that apartment? Hebrews 9:7

19. What was the purpose of the blood that he took in with him? Hebrews 9:7

The earthly Day of Atonement, which occurred “once every year”, is described in Leviticus 16. It symbolized the work Jesus would begin in the most holy place of the heavenly sanctuary in 1844.

To the Jews the Day of Atonement was a solemn day of judgment. The Jewish encyclopedia describes it as follows: “God, seated on His throne to judge the world . . . openeth the Book of Records; it is read, every man’s signature being found therein. The great trumpet is sounded; a still, small voice is heard; the angels shudder, saying, this is the day of judgment . ... On the Day of Atonement it is sealed who shall live and who are to die.”

21. What would this atonement do for the people? Leviticus 16:30

22. What would this make for the holy sanctuary and for the tabernacle? Leviticus 16:33

23. Why did the sanctuary need an atonement? Leviticus 16:16

24. It was necessary also that the patterns and heavenly things themselves should be what? Hebrews 9:23