31 - When All Religions Unite 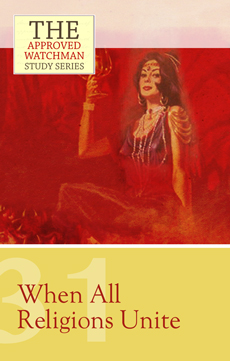 1. Unclean spirits came out of the mouths of what three apocalyptic figures? Revelation 16:13

2. The false prophet is identified as being the one that did what? Revelation 19:20

Those activities are done by the second beast of Revelation 13, the United States of America (Compare with Revelation 13:14). When referred to as a “beast,” as in Chapter 13, the focus is on the political government of the nation. But when referred to as a “false prophet,” the focus is unmistakably on the religious element of the country. The primary religion in the United States is Protestantism.  Revelation 16:13 therefore describes the ecumenical uniting of three classes of religion: Paganism, Catholicism, and Protestantism.

Many Protestants do not realize or fear the steady, rapid progress of the papal power. Downplaying their differences, Protestant leaders have begun to court the favor of Rome, slowly playing themselves into the hand of the system their fathers gave their lives to resist.

3. What are we told about these unclean spirits? Revelation 16:14

Spiritualism is here depicted as one of the greatest deceptions in the last days. Spirits of devils, working miracles, may appear as ministers of righteousness, heavenly messengers, or as departed loved ones (See lesson 10). These miracles, performed by the power of demons, will be presented as proof of their divine origin. Our only safeguard against deception is a thorough knowledge of the Scriptures.

The belief that the dead are conscious, as held by nearly every Protestant denomination, lays the foundation of spiritualism, and is the first great error through which Satan unites the people under his deceptions. This, with the error of Sunday sacredness, unites the denominations and binds them with Rome.

4. This three-fold religious union will lead to the gathering together of whom? Revelation 16:14

“Associate yourselves, O ye people, and ye shall be broken in pieces.” “Take counsel together, and it shall come to nought.” Isaiah 8:9, 10.

5. Those who trust in a confederacy ought rather to put their trust in whom? Isaiah 8:12, 13

6. John was shown the judgment of whom? Revelation 17:1

We learned in Lesson 28 that a “woman” in symbolic prophecy represents a church or religious system. While a pure woman represents God’s true church, a whore is the most appropriate symbol for a corrupt religious system (Jeremiah 3:1-8, 20; Ezekiel 16:15-43; Jeremiah 13:27).

7. With whom has she committed fornication? Revelation 17:2

No religious organization has historically been as entangled with the kings of the earth as has the Roman papal system.

8. The inhabitants of the earth have become drunk with what? Revelation 17:2

In Matthew 9:17 Jesus used the figure of wine to refer to teachings or doctrines. The “wine” of Revelation 17:2, being fermented, would indicate false or corrupt doctrines.

9. What extravagant embellishments illustrate the immense wealth of this religious organization? Revelation 17:4

11. What name is written on the woman’s forehead? Revelation 17:5

The Creed of Pope Pius IV, Article 10, states, “I acknowledge the Holy Catholic Apostolic Church for the mother and mistress of all churches.”

12. What have her daughters become? Revelation 17:5

“As is the mother, so is her daughter.” Ezekiel 16:44. Those denominations that have come out of Catholicism, yet which cling to her doctrines and follow her worldly practices are described in no more pleasing terms than their mother.

This text calls for a wider interpretation of the term “Babylon.” Because this angel announces Babylon’s fall, he must be referring to religion that was once pure and has now become corrupt. This Babylon cannot be Catholicism; for that system has not made any changes.

According to this verse, Babylon is identified by her “wine,” which is a product of her fornication with the world. That description would apply to any organization that teaches doctrines that are contrary to the word of God.

The word Babylon, derived from Babel, denotes confusion (Genesis 11:9). Does not this term describe the innumerable conflicting sects of Protestantism? This second angel is sent to declare the moral fall of all denominations that have departed from the pure doctrines of the word of God.

15. In what vivid terms is the moral fall of Babylon described? Revelation 18:2

This angel declares that spiritualism has infiltrated modern churches. “For by thy sorceries were all nations deceived.” Revelation 18:23.

16. What three additional charges are laid against her? Revelation 18:3

“The wine.” Among the false doctrines, which all nations have, drunk, the most serious is that of Sunday observance, which tramples upon God’s fourth commandment.

“The kings of the earth.” Protestants are becoming increasingly involved in government affairs. This relationship of religious groups with the kings of the earth is threatening the wall of separation that must exist between church and state. When this wall is removed, the results are fearful.

“The merchants of the earth.” The prophecy predicted that economic factors were to play a significant role in end-time religious political issues.

What a sad picture of modern religion. Although the Protestant reformers followed every ray of light they had, the organizations that bear their names have failed to advance into fuller light, and have fallen from the purity of the faith that they once held.

17. What final call is heard from heaven? Revelation 18:4

This is an unmistakable call for God’s people to separate themselves from those denominations that constitute Babylon. If we are members of a body that transgresses God’s law, we are partakers of her sins.