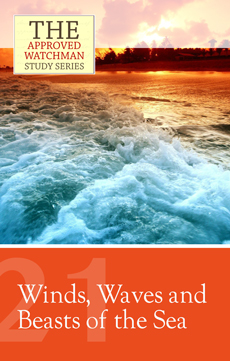 1. In Daniel’s vision, four winds strove upon what? Daniel 7:2

2. In symbolic prophecy, what do bodies of water represent? Revelation 17:15

Archaeology has revealed that composite lion-eagle creatures were common symbols in ancient Babylon. Regarding lions as royal beasts, Nebuchadnezzar engraved them on his walls and stamped bricks with them.

Historically, Babylon was followed by the combined dominion of the Medes and Persians (Daniel 5:28-31). This kingdom was represented in Daniel 2 by the image’s silver breast and arms, and in Chapter 8 by a two-horned ram. Just as one of the ram’s horns was higher than the other (8:3), so the bear of Daniel 7:5 raised up itself on one side.  At first the Medes were the more dominant of the two. But soon the Persians became the more powerful side, fulfilling the prediction that “the higher came up last” (8:3). Daniel 8:4 says that the Medo-Persian ram would push “westward, and northward, and southward.” Between 547 and 525 B.C. they conquered Lydia, Babylon, and Egypt. That explains the three ribs between the bear’s teeth (7:5).

Medo-Persia was followed by Greece. This winged leopard kingdom corresponds to the brass belly and thighs on the image in chapter 2, and the goat in chapter 8.

Wings give the connotation of swiftness. As the goat in Chapter 8 came from the west “and touched not the ground,” so Alexander’s conquests were accomplished speedily. Just as the leopard had four wings and four heads (7:6), so the goat grew four horns (8:8), which represented the four divisions of the Greek empire (8:22). It is also interesting to note that Macedonian coins were minted with the likeness of a goat.

10. The fourth beast was dreadful, terrible and what? Daniel 7:7

The fourth and final secular world empire was Rome. The great iron teeth (7:7) of this beast remind us of the iron legs of the image in chapter 2.

13. What did the horns of that kingdom represent? Daniel 7:24

15. What happened to three of the first horns? Daniel 7:8

Verse 24 says, “He shall subdue three kings.” Historically, this horn power was responsible for the fall of the Heruli in the year 493, the Vandals in 534, and the Ostrogoths in 538. The other seven still exist today as nations of Europe.

16. What kind of eyes did this little horn power have? Daniel 7:8

These characteristics, along with the contextual indications that he acted in a spiritual realm as well as having political authority, account for the statement that “he shall be diverse from the first” (7:24).

19. Daniel beheld until what happened? Daniel 7:9

“Cast down” in verse 9 is old English for “set in place.” The passage indicates that this judgment occurs among the heavenly host; while on earth the final activities of the kingdoms of men are nearing their close. This, of course, is the investigative judgment, which we studied in lesson 16.

21. How will the outcome of the judgment affect the little horn? Daniel 7:26