4 - Could We Be Earth's Final Generation? 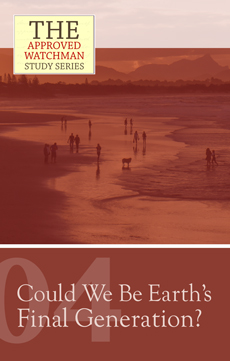 3. As He began His forecast for the church, after mentioning a few early signs, Jesus prophesied the destruction of what city? (Luke 21:20)

In less than forty years from the giving of that warning, Jerusalem fell to the armies of Rome. And just as He had predicted, not one stone of the magnificent temple was left upon another that was not thrown down.

4. What sign would let Christ’s followers know that the desolation of the city was nigh? Luke 21:20)

In October, A.D. 66, Cestius besieged Jerusalem. The Christians in the city recognized this as the sign given by Christ. When the Romans suddenly withdrew, the Christians fled, not one losing his life. Soon Roman armies led by Titus returned, and in A.D. 70, the city was destroyed. More than a million Jews perished.

For the next nearly 250 years the church suffered intense persecution from the Roman government. Christians were given to wild beasts, or smeared with pitch and lashed to poles to serve as torches for the arena. Three million were martyred for their faith in Christ. Then Constantine, realizing that Christianity could not be stamped out, staged a political conversion, and proclaimed Christianity (well mingled with paganism) to be the official religion of the empire. But the long centuries of enforced religion that followed produced even more severe religious intolerance, which took the lives of more than 50 million people. Not until the opening up of the American continent were Christians finally permitted full liberty of conscience without threat of persecution.

6. What specific signs did Jesus say would be given immediately after the tribulation of those days? (Matthew 24:29)

With the establishment of the United States of America, the centuries of religious persecution came to an end. The Declaration of Independence, perhaps the most famous freedom document of all time, was signed in 1776, stating, “all men are created equal, that they are endowed by their Creator with certain unalienable rights, that among these are life, liberty, and the pursuit of happiness.” America opened her doors to all who sought religious freedom, guaranteeing the right of all to worship according to their own conscience.

Jesus said, “Immediately after the tribulation of those days shall the sun be darkened . . ..” The United States had barely been born when on May 19, 1780 it witnessed what has been remembered in history as the great Dark Day. According to the Boston Gazette, “there was the appearance of midnight at noonday.” The darkness began around 10 a.m. Candles were lighted; animals thought it was night. The Connecticut Historical Collections describes the tension in the state legislature where, “a very general opinion prevailed, that the day of judgment was at hand.” The poet John Greenleaf Whittier called it “a horror of great darkness.”

Jesus went on to say, “ . . . And the moon shall not give her light.” The Collections of the Massachusetts Historical Society, referring to the Dark Day, contains this record: “The darkness of the following evening was probably as gross as ever has been observed . . .. If every luminous body in the universe had been shrouded in impenetrable shades, or struck out of existence, the darkness could not have been more complete. A sheet of white paper held within a few inches of the eyes was equally invisible with the blackest velvet . . .. This gross darkness held ‘till about one o’clock, although the moon had fulled but the day before.”

The third sign Jesus mentioned was “ . . . The stars shall fall from heaven.” On November 13, 1833, from 2 a.m. until daylight, the sky all over North America was aflame with meteors. One observer remarked, “It seemed as if the whole starry heavens had congregated at one point near the zenith, and were simultaneously shooting forth, with the velocity of lightning, to every part of the horizon; and yet they were not exhausted.” Astronomer W. J. Fisher, in The Telescope, called it “the most magnificent meteor shower on record.

7. According to Revelation, what natural disaster would occur just before the signs in the sun, moon, and stars? (Revelation 6:12, 13)

One of the most extensively felt earthquakes ever recorded occurred November 1, 1755. Extending over an area of at least four million square miles, it covered the greater part of Europe, Africa, and America. Seventy thousand people were killed. In Lisbon, Portugal violent shaking lasted for at least six minutes, destroying most of the city. The sea rose fifty feet above its ordinary level.  Encyclopedia Britannica called it “the most famous of all earthquakes.” G. A. Eiby, in About Earthquakes, referred to it as “the greatest earthquake on record.”

8. How did Jesus describe the anxiety and trouble that would exist on the earth after these signs? (Luke 21:25)

9. What effect would the dreadful outlook have upon people? (Luke 21:26)

10. According to prophecy, what reason would scoffers give for denying that the end would be soon? (2 Peter 3:3, 4)

11. In the end-time economic collapse, what will happen to money that has been saved up? (James 5:1-3)

“But the end of all things is at hand: be ye therefore sober, and watch unto prayer.” 1 Peter 4:7.

12. When will this sudden destruction hit? (1 Thessalonians 5:3)

13. List some of the signs of moral deterioration that were predicted to occur in the last days. (2 Timothy 3:2, 3)

18. What about mobility and the extent of knowledge in the last days? (Daniel 12:4)

“Lift up your heads; for your redemption draweth nigh.”