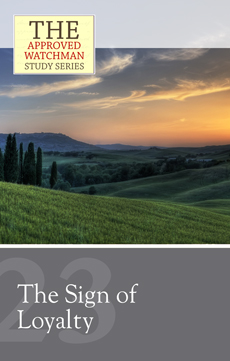 1. John saw another beast coming up out of what? Revelation 13:11

In previous lessons we have learned that “beasts” in prophecy represent nations, and that the “sea” and the “earth” represent, respectively, the eastern and western hemispheres. The nation, therefore, represented by this beast that was “coming up” at the very time that the first beast of Revelation 13 was taken “into captivity” (Revelation 13:11, 10), in a continent NOT crowded by “peoples, and multitudes, and nations, and tongues” (Compare Genesis 1:10 with Revelation 17:15), is none other than the United States of America.

From the start, the United States was characterized by its unique separation of church and state, allowing freedom of religion to all people. But its lamblike bearing is to reverse into a power that speaks as a dragon.

3. How much power will this beast exercise? Revelation 13:12

7. What will he propose that the people shall do? Revelation 13:14

“And he had power to give life unto the image of the beast.” Revelation 13:15.

During the supremacy of the first beast, the religious decrees of the church were enforced by the strong arm of the state, creating a union of religious and civil power. When the United States adopts the same course, it will have created an image of the beast.

8. No longer hesitant to enforce religious duties, what will the government attempt to make everyone do? Revelation 13:16

9. What means will be employed to compel all to receive this mark? Revelation 13:17

10. What ultimate penalty will be set for violating the law? Revelation 13:15

11. With a loud voice, a warning is given against those who do what? Revelation 14:9

13. A noisome and grievous sore fell upon whom? Revelation 16:2

14. The mark is received in their right hand, or where else? Revelation 13:16

15. John saw an angel ascending from the east having what? Revelation 7:2

16. The people of God are to be sealed where? Revelation 7:3

20. What are they called who are sealed in their foreheads? Revelation 7:3

“Servants of Christ, doing the will of God from the heart.” Ephesians 6:6.

21. Christ’s people are described as having what written in their foreheads? Revelation 14:1

22. When God proclaimed His name to Moses, what characteristics did He mention? Exodus 34:5, 6

We learned in a previous lesson that “sanctify” means to reserve for sacred use, to consecrate, or to make holy.

25. What has the Lord done which reveals His authority as the true God? 1 Chronicles 16:26

26. At creation, what did God sanctify as the sign of His authority? Genesis 2:3

29. In contrast, what has the Beast declared to be the mark of its authority?

“But the Protestant mind does not seem to realize that in . . . observing the Sunday . . . they are accepting the authority of the spokesman for the church, the pope.”—Our Sunday Visitor, Catholic weekly, Feb. 5, 1950.

“Sunday is our mark of authority…The Church is above the Bible, and this transference of sabbath observance is proof of that fact.”—The Catholic Record, London, Ontario, Sept. 1, 1923.

“Of course the Catholic Church claims that the change was her act... And the act is a mark of her ecclesiastical power and authority in religious matters.”—Office of Cardinal Gibbons, through Chancellor C. F. Thomas, Nov. 11, 1895.

“The observance of Sunday by protestants is an homage they pay, in spite of themselves, to the authority of the church.”—Louis Segur, Plain Talk About the Protestantism of Today, 1868 ed. p. 213.

32. Who will stand on the sea of glass, having the harps of God? Revelation 15:2